The following forms of VAD are distinguished:

According to some authors, the frequency of severe androgen deficiency in men older than 30 years varies from 7% to 30%. The percentage of patients with VAD strongly depends on the age group to which the man belongs. For example, men aged 40-49 years, suffer from VAD twice as often as men aged 30-39 years. 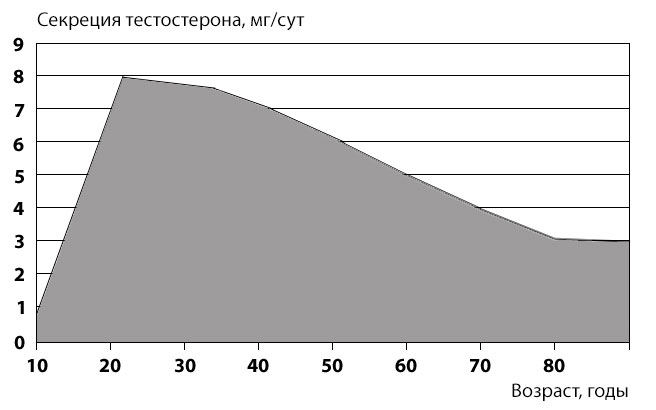 The timing of the onset of VAD

In menopause, unlike women, there is no pronounced decrease in androgen production, and therefore the age of diagnosing VAD can vary from 35 to 70 years. Why is there such a wide variation? This is primarily associated with the initial level of the hormone at the age of its peak production (20-25 years), with the so-called sexual constitution of men (Fig. 2).

Men whose hormone levels at the peak period of their secretion are closer to the upper level (33 nmol / L) have a stronger sexual constitution, and with a decrease in testosterone production (1% per year after 30 years), they later notice symptoms of VAD, and subsequently, they can only have a relative form of androgen deficiency.

Men with a low sexual constitution, much faster notice the effects of a natural decrease in androgens. Moreover, in such men, the absolute form of age-related hypogonadism is much more often diagnosed earlier.

A decrease in the level of androgens occurs in all men without exception. It turns out that a relative VAD will wait sooner or later for every man, but not everyone will have an absolute VAD.

Thus, men have a strong individual indicator of the onset of androgen deficiency, due to its sexual constitution.

In addition to the sexual constitution of men, the following chronic diseases can lead to early androgen deficiency:

Men with these chronic diseases have a decrease in testosterone levels of 10-15% compared with healthy men of the same age, which brings the average reduction in the secretion of sex hormones by 5-7 years (Fig. 3). But at the same time, a decrease in the level of androgens occurs at the same rate as in healthy men.

Fig. 3 - The effect of chronic diseases on the onset of VAD.

Pathogenesis and clinical manifestation of VAD

The reasons for the age-related decrease in androgens are:

The diagnosis of VAD is confirmed only if the patient has symptoms of hypogonadism with low testosterone in the blood.

The first attempts to treat androgen deficiency in older men were made back in 1940. However, they were not widely used among doctors, for some reasons: firstly, the drugs of that time did not have all the effects of natural testosterone, and, moreover, had pronounced side effects and toxic effects on the body; secondly, the prevailing opinion of doctors about the physiological nature of the processes during aging was another reason to abandon replacement therapy.

The emergence of new, more advanced testosterone preparations, as well as new data on the positive effect of androgens and the significant role of androgen deficiency in the aging process of the male body, prompted the interest of doctors and patients in hormone therapy for men with age-related hypogonadism.

However, despite the recognized fact of the need for hormone replacement therapy for VAD, there is still no clear indication for its appointment.

Approaches to hormonal therapy for VAD

The treatment of age-related hypogonadism is aimed at normalizing the level of androgens in the blood serum of a man. There are two approaches to treatment:

The choice of hormone therapy

As can be seen from the table. 2 substitution and stimulating therapies have their advantages and disadvantages.

CG therapy is a new form of hormone therapy, and has a significant advantage: stimulation of the production of our own sex hormones and spermatogenesis. To identify the possibility of using CG in treatment, a CG test is done: after a three-day injection of the drug at a dose of 1500 IU, the patient should have a testosterone increase of at least 50% the next day. The drug has only an injectable form. The frequency of injection is 2-3 times a week, starting from 1,500 units and is carried out in courses of one month, followed by a month's break.

Substitution therapy is a proven and popular method for treating androgen deficiency. The main advantages of substitution therapy are, firstly, in the variety of forms of drug administration (see hormonal drugs for men ), and secondly, in the convenience of therapy (thanks to the injection drug Nebido, whose therapeutic effect lasts 10-14 weeks), thirdly, substitution therapy will be effective regardless of the reasons that caused low levels of androgens.

Do I need to resort to hormone therapy in old age?

Modern medicine has the latest drugs that meet stringent conditions, as well as extensive experience in their use. Despite this, questions remain about the effect of substitution therapy on some systems of the male body. The biggest controversy is the use of androgens in prostate cancer. Although there is not a single study proving a clear relationship between the pathological effect of androgens on the prostate, today prostate cancer is an absolute contraindication to the use of androgens and stimulant therapy.

On the other hand, there is accurate evidence of a positive effect of androgens on:

As a result, using androgen therapy, older men can avoid the diseases characteristic of this period and significantly improve the quality of life.

Today, older men have the opportunity to extend the days of their youth and avoid many ailments of old age. Our fathers or grandfathers did not have such an opportunity, but they lived in more "sparing" health conditions. But no matter how optimistic the prognoses of hormone therapy are, the choice always remains with the patient.