Currently, the most popular form of treatment for androgen deficiency is testosterone replacement therapy.

The first reports of successful treatment of androgen deficiency were dated to the 40s of the last century. However, drugs of that time had many side effects and did not have the full spectrum of natural testosterone.

The first popular synthetic testosterone preparations were sold in the form of tablets (methyltestosterone, fluoxymesterone, etc.). Oral administration metabolized testosterone in the liver, as a result of which most of it was destroyed, while exerting a strong toxic and carcinogenic effect on the liver. In this regard, in most countries, drugs based on these testosterone derivatives are banned for use, giving way to modern analogues.

A great influence on the development of synthetic forms of testosterone plays its role in sports. Despite the fact that the use of anabolic steroids is prohibited, incidents with doping control continue to boom at the Olympic Games and other major competitions.

Methods of introducing androgens are divided into the following:

Notes: * - hepatoxic and banned in a number of countries; ** - not registered in Russia; *** - discontinued. 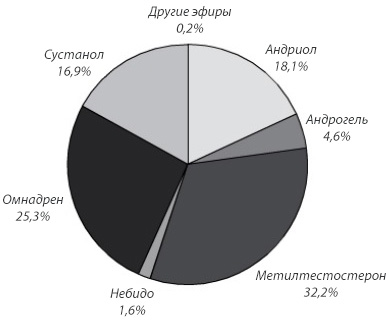 Fig. 1 - The share of various forms of androgenic drugs on the pharmaceutical market of Russia (2007) (source “Practical Andrology”, S. Yu. Kalinchenko I. A. Tyuzikov, 2009).

A sharp change in the concentration of androgens in the blood, often felt by the patient himself, is an undesirable effect when using testosterone preparations.

Nevertheless, both individual testosterone esters and their mixture have been successfully used so far because of their low cost, availability and effectiveness. In particular, testosterone esters are loved by power athletes and bodybuilders for their anabolic properties and for the possibility of creating a high concentration of testosterone in the blood.

The injection drug of choice for hormone replacement therapy (HRT) today is testosterone undecanoate (Nebido). Its difference from other testosterone esters is the prolonged action (1 injection in 10-12 weeks) and the absence of pathological jumps in the level of androgens. The drug Nebido has a full spectrum of testosterone and does not cause hepatotoxic and hepatocarcinogenic effects.

Oral drugs have a mild effect compared to injectable forms, even when using high doses. Therefore, it is advisable to use oral forms of testosterone in cases where there is a slight decrease in androgens. The drug of choice for HRT is Andriol. Compared with old analogues (methyltestosterone, fluoxymesterolone), when Andriol is used, most of the testosterone bypasses the metabolism in the liver, and enters directly into the systemic circulation, which contributes to the rapid achievement of the required concentration of the hormone. However, this also determines the fast half-life of the drug (3-4 hours), which forces the patient to re-take (3-4 times a day).

Transdermal forms of testosterone preparations (gels, patches) are gaining more and more popularity. They quickly create the necessary level of androgens in the blood, but they do not undergo hepatic metabolism as oral preparations, and at the same time they do not create the supraphysiological level of testosterone, as is the case with testosterone esters (cypionate, enanthate) and a mixture of esters (Sustanol, Omnadren) . The advantage of transdermal forms is their non-invasiveness, the possibility of independent use, and the absence of pronounced side effects.

In some countries, implants are a common treatment for androgen deficiency. With the help of surgical intervention, the implant is placed subcutaneously to the patient, evenly releasing the hormone for 6 months. In Russia, testosterone implants are not registered. 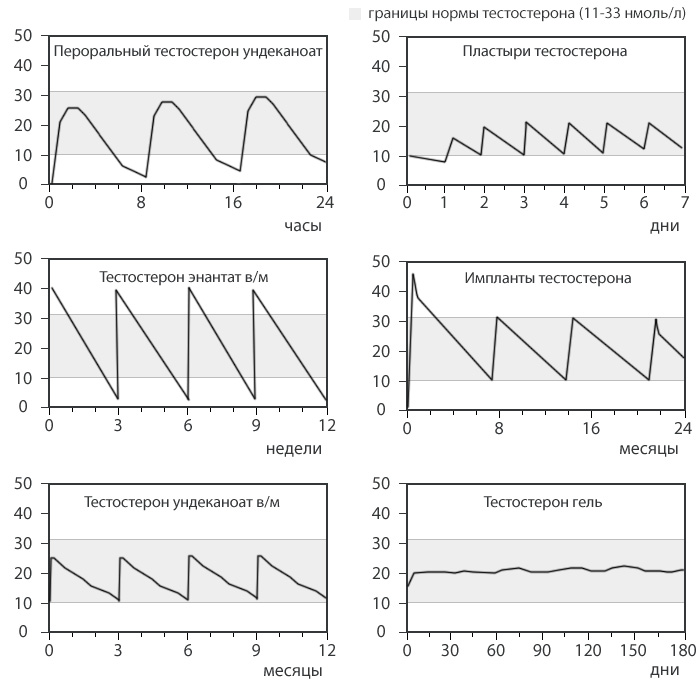 To exclude prostate cancer, prior to replacement therapy, it is necessary to conduct a digital examination of the prostate gland and determine the level of prostate-specific antigen (PSA).

Relative contraindications mean that with HRT androgens, the course of the condition may worsen.

Side effects of hormone therapy

Side effects of testosterone occur only when using large doses of the drug in excess of normal physiological parameters. The use of androgens in physiological doses does not lead to side effects.

Possible side effects caused by large doses of androgens:

Read more "Side effects of testosterone in replacement therapy . "