Can I get pregnant with teratozoospermia?

Teratozoospermia - the presence of a large number of abnormal cells in the seminal fluid. The abnormal units may be male reproductive cells with a pathological structure of the neck, tail or head. 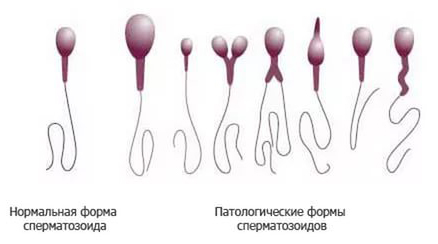 Fig. 1 - Teratozoospermia - the content of pathological forms of sperm in the ejaculate is above normal.

In the spermogram of a healthy man, pathological units are always found, the percentage of which remains within the normal range. With teratozoospermia, the number of pathological elements increases several times, which threatens the onset of infertility.

Medical professionals do not single out one single cause of this phenomenon. There are pathological factors that can cause qualitative changes in seminal fluid. These factors include:

In medical practice, there have often been cases of the formation of teratozoospermia on the background of stress or other emotional distress (for example, depression in a man ).

With this pathological condition, the man does not notice any visible changes in his condition. At first glance, the clinical picture of teratozoospermia is completely absent. To recognize negative changes is possible only during the spermogram (see. "How to properly prepare for the delivery of spermogram" ). There are such structural changes in male germ cells:

Abnormal germ cells are not able to fully fertilize an egg. This entails not only male-type infertility, but also increases the risk of a negative result during in vitro fertilization (IVF).

For accurate diagnosis, the so-called teratozoospermia index plays an important role. A similar test is used to determine the number of abnormal germ cells. The index is calculated by dividing the total number of defects by the number of abnormal spermatozoa. In the process of counting, medical specialists take into account any anomalies of sperm development.

Further, they are sorted according to the location of the defect (isthmus, tail part or head). When an anomaly is detected in one part of the reproductive cell, index 1 is set. If more than one part is involved in the pathology, then the specialists label this number of defects with the corresponding indices. The maximum index reaches 3, which indicates the total defect of the sperm.

In order to achieve high information content, laboratory specialists perform staining of biological material according to the Kruger method. The permissible rate is not more than half of the modified germ cells. The diagnosis is confirmed in case of damage to more than 85% of the spermatozoa.

The range of teratozoospermia index from 1 to 1.6 allows you to perform IVF with a sufficient probability of a positive result.

After the discovery of a large number of abnormal germ cells in the seminal fluid, the man is selected an individual course of drug therapy. A prerequisite for effective treatment is the elimination of factors that contribute to changes in the structure of germ cells. Basic therapy of teratozoospermia includes such groups of drugs:

If the cause of this condition is infectious and inflammatory diseases of the reproductive system, then the man will be prescribed a course of antibiotic therapy in combination with anti-inflammatory drugs. For the entire period of treatment, it is recommended to completely abandon the use of alcohol and tobacco.

The possibility of conception

The probability of natural conception with teratozoospermia is directly proportional to the number of abnormal germ cells in the seminal fluid. The growth of this indicator reduces the chances of a man to conceive a child in a natural way. The causes of morphological changes in sperm cells also affect the fertility of the male body.

This condition is not a sentence for the male body, but the percentage of the probability of natural fertilization can be calculated only on the basis of sperm data. With a slight increase in the number of abnormal sperm, the man is recommended to try self-conception on the background of the course of drug therapy. If the teratozoospermia index exceeds the permissible values, then the pair are advised to use the services of in vitro fertilization (IVF) .

Blood stasis in the pelvis - treatment and prevention