Pubic-coccygeal muscle (LK-muscle) - this muscle, located between the pubic bone and the coccyx (between the testicles and the anus), is responsible for rhythmic contractions during orgasm. 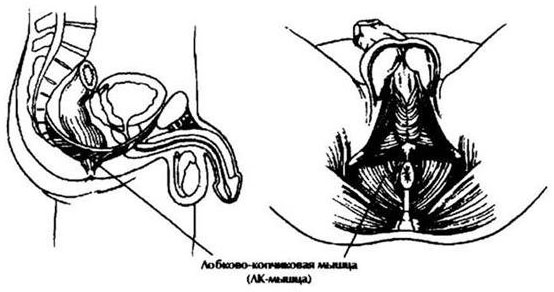 Fig. 1 - The location of the pubic-coccygeal muscle in men (ist. Mantek Chia "Taoist secrets of love").

Even the ancient Taoists, practicing Sexual Kung-Fu, knew how important it was to train the LC-muscle and gave it a special place in their sexual practices. But the Taoist culture was, if not forgotten, it was not much in demand in most of the world, and the importance of this important muscle was lost.

The modern history of the discovery of the therapeutic effect of strengthening the pubic-coccygeal muscle begins with Dr. Arnold Kegel. In the middle of the 20th century, Kegel develops a set of exercises for women aimed at combating urinary incontinence. Subsequently, it turns out a lot of positive effects on the prevention and therapeutic action of these exercises in other areas. As it turned out later, such exercises have no less strengthening effect on men.

What are the benefits of training pubic-coccygeal muscle?

How to detect pubic-coccygeal muscle?

Method number 1. One of the easiest ways to detect the pubic-coccygeal muscle is to delay the jet during urination: place your fingers between the testicles and the anus, for a while interrupt the stream. At the time of the interruption, the LK muscle is strained and remains tense while urination is delayed.

Method number 2. During an erection, make bouncing movements with the penis, trying to lift it up. LK-muscle is responsible for this movement.

Exercises for LK-muscles are divided into two modules: the main and additional. You must start execution from the main module. The basic set of exercises is self-sufficient, since the tension and relaxation of the pubic-coccygeal muscle is the basic principle of its training. On this principle, the rest of the exercises, which are only a variation of the exercise "The tension of the LC-muscles."

Exercises are performed 2-3 times a day (preferably in the morning and in the evening). The advantage of exercises aimed at compressing the LK muscles is that they can be performed anywhere, and in any position (but more comfortable while sitting): in public transport, at work without getting up from a workplace, in a line, etc. .

The main complex of exercises

The easiest way to train your LK muscles is to stop the jet while urinating. You can do this every time you go to the toilet, or several times a day. The inability to stop the stream in the middle of urination, and then resume it, speaks of the weakness of the pubic-coccygeal muscles.

Stopping urination the first few times can cause some pain, which is normal. After a while it should pass. If, after a long practice (several weeks), the pain persists, you should probably consult a doctor.

Perform from 2-3 stops per urination. Exercise "Stop the jet" is a basic exercise and can be used at the beginning of the training path, or as an additional practice to more serious exercises. After reviewing and securing the implementation of this exercise, go to the more powerful techniques of training LC-muscles.

Exercise 2: "The voltage of the LC muscles"

When the first exercise is mastered, and you have learned to feel your pubic-coccygeal muscle so that you can strain it in isolation, go to the main exercise, which directly trains the LC muscle.

Fulfillment: tighten and relax your pubic-coccygeal muscle as much as possible. Try to achieve isolated voltage LK-muscles without tension of other parts of the body, especially the muscles of the pelvis. In the technique of the exercise, it is important to have quality, that is, the force of compression of the muscle, not the quantity.

Perform 1-3 approaches 10 times. Increase the compression force and the number of repetitions over time.

In addition to the main complex, pay attention to a set of exercises to increase potency .

Exercise 3: “Holding the voltage of the LK muscles”

Fulfillment: hold tension in LK-muscle for 3 seconds, then relax it for 3 seconds. As in the previous exercise, the key role here is played by the force of compression, and not the duration and number of repetitions. As fitness develops, increase the time of stress retention in the LC-muscle. The rest time at the same time is equal to the time of the working approach, i.e. if the voltage lasted 5 seconds, then the relaxation will last the same.

Perform 1 approach 10 times. Increase the strength and duration of compression over time.

Fulfillment: tighten and relax your pubic-coccygeal muscle as quickly as possible. Here, as in other exercises, the quality of the tension is important, not the speed or quantity.

Exercise 5: "Lifting the weight of the LC-muscle"

An alternative exercise that allows you to train LK-muscle with weights. The exercise is performed with an erect penis, to do this, put a towel on it and perform, as it were, bouncing movements, trying to lift the towel as high as possible. As you exercise, you need to increase the weight of the burden, for example, you can wet a towel, etc.

General recommendations for performing the exercises:

Why and how to perform a testicle massage?
Exercises to increase testosterone
Jelk - penis exercise
Nuts to increase men's health and potency
The benefits of sex for men