The use of LOD-therapy to restore sexual function

For the treatment of erection disorders in men, depending on the reasons for their development, various techniques are applied. One of them is the use of local negative pressure (LOD-therapy) in the form of effects on the cavernous body of the penis. This therapeutic technique was proposed by sexologist R.V. Beleda, she underwent appropriate clinical trials and received copyright certificate.

The principle of operation and justification of LOD

The therapeutic mechanism of local negative pressure is a positive effect on the cavernous body of the genital body due to the stimulation of blood flow in them. This is achieved by creating a negative pressure (vacuum) in a special tube (minibar chamber), which is usually made of plexiglass. The base of the tube is tightly pressed to the pubic joint, the penis is placed into it, and then gradually with the help of a special pump air is pumped out of it (see Fig. 1). This creates a negative pressure (on average 150-300 mmHg below atmospheric pressure), the skin, tissues and cavernous bodies of the penis are mechanically stretched, which leads to effects on various nerve receptors (chemo-, baro-, and thermoreceptors) tissues. 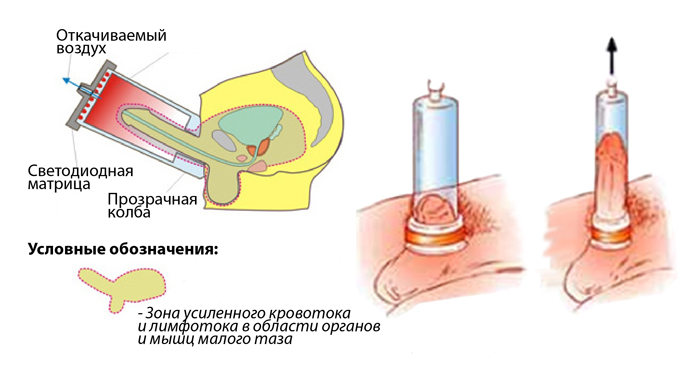 In addition to enhancing the intensity of blood flow in the cavernous bodies, LOD-therapy additionally has several physiological effects, which include:

These therapeutic effects after LOD help to improve erection in men , as well as the functional state of the testicles, their appendages and prostate gland.

Therefore, the use of local negative pressure for the penis is physiologically justified for various disorders of functional activity, including psychogenic in nature.

The application of the method of exposure to local negative pressure on the penis is shown for various functional disorders and somatic pathology, which include:

General contraindications include various pathological conditions of the whole body of a man:

Local contraindications to the LOD include various pathological changes in the penis, the tissues of the pelvic region, as well as internal genital organs:

Before starting LOD-therapy, the doctor must be convinced of the absence of contraindications.

LOD-therapy is carried out in a medical institution under the supervision of a physician. Before the procedure, the male penis, with a pre-dressed condom, is placed in the mini-bubble chamber tube, while the scrotum and testicles must remain outside. Then the doctor connects the tube to a special device with a pump for air dilution and a regulator to control the negative pressure indicator and turns it on. During the procedure, the doctor monitors the general condition of the patient, and periodically asks questions about his state of health. He necessarily pays attention to the condition of the skin of the penis, which becomes hyperemic (acquires intense red staining) due to an increase in blood flow. Also during the procedure a passive erection of the penis is possible.

Modern devices for LOD-therapy are equipped with special fuses that prevent the air in the minibar chamber from being diluted above a certain value. In case of deterioration of the patient’s general condition, the appearance of severe pain in the penis, the procedure is temporarily stopped. The vacuum of the air as a whole lasts 15-20 seconds, then the pressure levels off, after which the session is repeated, up to 15 sessions of LOD-exposure are performed in one procedure. The course of treatment can include up to 20 procedures of LOD-therapy, on average they are carried out 3 times a week, the last 8-10 days can be performed daily.

LOD procedure is low-impact, therefore, when properly applied, it rarely leads to complications, which include:

In general, LOD-therapy procedures lead to a noticeable improvement in erectile function, an increase in libido in most men.