About male depression - causes, symptoms and methods of dealing with the disease 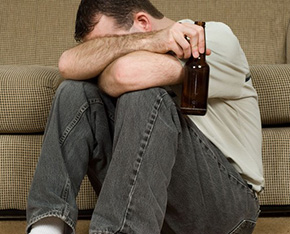 “Men do not cry” - this stereotype today governs the lives of most men, regardless of age or status. But belief in this principle does not at all contribute to maintaining a harmonious psycho-emotional state: every year the problem of male depression increases, and social stereotypes only worsen the situation.

Practice shows that most men are shy of their emotions, consider them weakness, and in every possible way try to isolate themselves from their own experiences. Well, to share your feelings with someone is generally a taboo topic. Hence the denial of the depressive state and its hidden and “modified” states. If a woman still admits a trip to a psychologist, then men, for the most part, find themselves at a reception at the healer of the soul in a pre-suicidal state.

Most often, male depression is expressed through its “helpers”: aggression, various addictions, excessive sexual activity and in the form of psychosomatic diseases.

It is important to understand that depression is not a weakness of character. She is the first beacon to the fact that life requires change. And to visit a psychotherapist means to say “yes” to your own health and the quality of your life.

About the causes of male depression

Is there a mathematically exact link between cause and depression? No, it is not - each case is unique, because we are upset by what is significant for us, but for every man it is something different. And all the work with clinical patients allows us to identify several of the most "popular" factors that become the trigger for depression. Let's list them:

Sometimes depressive symptoms manifest themselves for no apparent reason. In such cases, we are talking more about secondary depression, which arose against the background of deterioration of the nervous system; to put it simply - your neurons are "tired." So, if the mental and emotional states have already been broken, then anything can be the development of depression.

It is believed that a certain percentage of preparedness for depression is inherited. And if one of your older relatives suffered from any disorders, including depressive episodes, the risks of “catching on” depression increase. However, the connection of inheritance has not yet been fully proven.

The second question is the relationship of hormones and depression. In a very rough way, we can distinguish the group of "hormones of happiness"

Indirectly, all these hormones are some regulators of our psycho-emotional state. Their shortage can serve as a somewhat depressed state, but not depression.

If the protracted depression and fatigue is associated precisely with a shortage of hormones, then the psychologist will not help here - a special treatment with the prescription of hormonal drugs is required. Problems with the production and regulation of the amount of certain hormones can be inherited.

Symptoms of depression in men

However, this is a clinical picture, which is often associated with other disorders. And yet, approximately in this form, depression is found in women (apathy, indifference, lack of feelings of joy, sadness). In men, depression does not always take a classic look.

Most often, men simply do not recognize emotional problems, and then powerful protective mechanisms that completely change the picture of depression come to the rescue. Basically - this antisocial manifestations and aggression.

In principle, signals of the development of a depressive state can be:

And yet, it is worth noting some ambiguity of several symptoms. Extreme sports also perform other functions that are not related to depression. The very fact of the sudden appearance of strange hobbies is important here: for example, a person who was afraid of heights begins to jump with a parachute. In such cases, it may be just an attempt to replay the growing depression, and a kind of imitation of suicide.

In general, these symptoms perform the function of camouflage: the fact of being broken hides not only from the environment, but also from itself.

How to deal with depression?

Important note: depression is a clinical and severe syndrome that often requires inpatient treatment. At home, depression cannot be cured, so it’s more like how to prevent a developing disorder.

You need to be honest with yourself. The key problem for many men is the acceptance of their own emotions and experiences. You should not attribute mythical abilities and skills to the strong sex: first of all, a man is an ordinary person. Acknowledging your emotions means discovering what you need to work with.

If you feel increasing depression and fatigue - do not be silent. Relatives, friends, close people can be a good buffer zone for stopping the growing despondency. As they say, depression loves the ears. Share your experiences, literally speak out: after all, a dialogue with a significant person in itself carries a powerful psychotherapeutic potential. And at the same time, the danger of emotional rejection remains, which can aggravate the condition.

Try to find the cause of your condition. No treatment makes sense until the cause is eliminated, or your attitude to it has not been revised. For example, at work, a man faces a systematic violation of his self-esteem: humiliation by the authorities. As a result, whatever we do, will not bring results until the situation changes. You can not sew up the wound until all the dirt has been cleaned. In our situation, the choice is small: either openly talk with the authorities about the unacceptability of certain behavior, or change jobs.

Pay more attention to healthy rest. Depression is also a state of the nervous system, in particular - the brain. Excessive workload, poor quality rest and attempts to rest through alcohol or drugs only aggravate the condition. Allow time for quiet walks, reading literature, or even meditation. Restoration of the resources of the central nervous system contributes to the overall improvement of the condition.

Show social activity. Even through “I don't want” it is sometimes useful to go shopping with my wife or with the child to the cinema. A person is a fundamentally social being and his activity in society is an important component of a successful psycho-emotional state.

Unfortunately, sometimes the development of depression is just a symptom of other disorders and diseases: it is extremely important to distinguish "pure" depression from third pathologies: leaving the underlying disease without treatment, you risk your mental health.
Among mental disorders, depressive states are found with:

Among the somatic causes of depression (somatogenic depression) can be:

So, to exclude the possibility of other diseases - yet you should not give up the full psychological and physiological diagnosis. Understanding the causes of the disease - the natural key to success in treatment!

Overcoming a midlife crisis without problems
Manifestations of midlife crisis - the main symptoms
How to gain confidence in a man?
Male Hormonal Failure - Symptoms and Treatment
What vitamins to take for tired men?