Today, most athletes come to the gym with the goal of not only increasing their muscles, but also increasing their strength. However, few people know that bodybuilding exercises generate a slightly different force. Standard lift or bodybuilding movements increase the so-called “dead” force, which is practically not used in life, unlike the functional one, which we will discuss in this article.

Combined style martial artists often use functional movements, as they develop the striking power of a person, his speed of movement in various planes and other factors that any fighter needs.

All the exercises below cultivate the so-called functional strength, so that the positive phase should be performed dynamically quickly. It is an explosive style of performance that is a kind of a postulate of these exercises. If you look at them from the point of view of bodybuilding, then, first of all, the increase in strength characteristics and lengthening of the muscular fascia are evident. A fascia is a sheath that covers the muscles like stockings on legs. Muscles will not begin to grow until the body elongates the fascia. Therefore, functional exercises can be considered in the training in gaining muscle mass.

1. Lifting the bar in front of you

Pay attention to the working projectile - this is a bar. A similar variant with dumbbells on the structure is an insulating exercise. As for the barbell, its lifting requires the coordinated work of the deltoid and trapezius muscles. 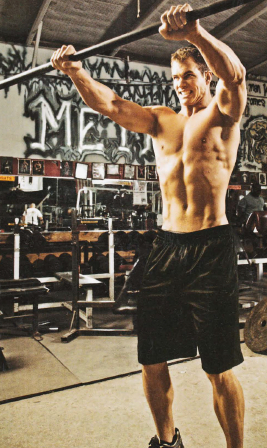 In the starting position, stand up straight, with your knees slightly bent. Arrange the feet on the width of the pelvis, toes forward. Take the neck straight grip on the width of the shoulder girdle. With a powerful explosive effort, lift the neck to the level of your collarbone. The back remains motionless. Hold the top point for a couple of seconds and, under control, lower the bar to the starting position. Below, after a second pause, start a new repetition.

The key factor is the fixed pelvis. All possible deflection of the torso back and forth will reduce the productivity of the exercise to zero.

Familiar to all combatants exercise, perfectly loading the shoulder girdle and upper back. To perform it, you will need a neck. Put one of its ends on the pancake from the bar, and the other rest on any support so that the bar can move along an arcuate path. Take a look at Figure 2 to get your bearings. 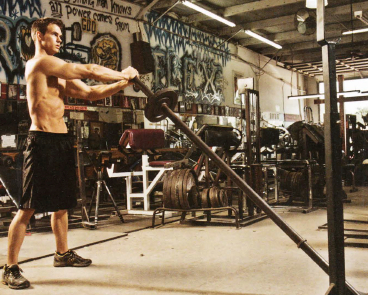 Stand with your spine straight and your feet wider than your pelvis. Grasp the end with the burden with both hands. The angle of inclination of the bar should be such that the highest point of the arc is at the same level as your eyes. Start fast movement of the neck from side to side. Movement should be made only with straight arms and only along an arcuate path. Perform 12-20 reps on each side.

Exercise aimed at the abdominal muscles. As a burden, you can use weights, barbells, pancakes and dumbbells. The technique is quite simple. 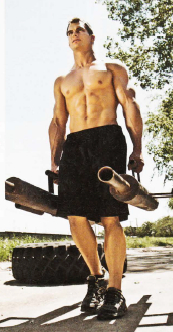 Take the chosen burdens and straighten with them in the style of deadlift. Start walking slowly, but steadily along an imaginary straight line. Take 15-20 steps and put the weight on the floor. Turn around and go the trajectory in the opposite direction.

Try not to swing to the sides and not to include the trapezius muscles. A key factor in productivity is the direct body. The abdominal muscles will ask you to lean forward slightly. Try not to give in to such persuasions.

Basic principles of muscle growth
How to form a V-shape?
Do I need periodization (cycling) of loads?
The main reason for the lack of muscle growth
What is the significance of genetics in the growth of muscle mass?