Many men over the age of 40 have certain problems with being overweight. Some of them are clearly obese, someone less. Why is it in middle age that a tendency to weight gain appears? It is all about the level of sex hormones of men who control body fat: by age 40, men have a varying degree of lack of male sex hormones.

Low testosterone is the main cause of male obesity

Testosterone is the main male sex hormone responsible for the manifestation of secondary sexual characteristics and sexual desire. The higher the level of testosterone in the blood , the more pronounced are male qualities: muscle growth and strength, increased sexual activity and desire, male-type hair growth, and so on. Testosterone levels affect the functioning of virtually all organs in the male body. Testosterone is also responsible for increased metabolism, i.e. controls fat deposition. As a rule, at a normal level of testosterone, obesity does not threaten a man. But everything changes dramatically if the level of sex hormones is insufficient.

Consider the effect of lack of testosterone on the deposition of adipose tissue in more detail. Both in the male body and in the female there are male and female sex hormones, the only difference is in their level. These hormones are antagonists of each other, i.e. the more one, the less the other. When testosterone levels begin to decline, estrogen levels in men increase, leading to the deposition of excess fat. The first fat deposits in men fall on the abdominal area. Abdominal fat is dangerous because it converts testosterone to estrogen, which further suppresses testosterone production. Plus, in the fatty tissue, the hormone leptin is produced, an elevated level of which reduces testosterone production in the testicles. 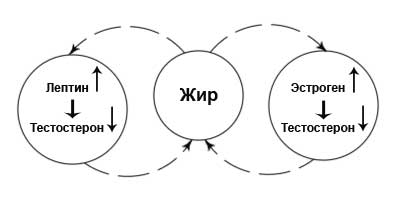 It turns out a vicious circle that must be broken by increasing the hormone testosterone in the blood of a man. You can increase testosterone in natural ways if a man is able to produce his own hormone in sufficient quantities, but if not, then you will have to spend hormone replacement therapy with the help of hormonal drugs for men .

In addition to reducing testosterone levels, obesity provokes diseases of the cardiovascular system (ischemia, stroke), hypertension, and diabetes. Observations of doctors for obese people have shown that they are sick more often than people with normal levels of adipose tissue. In addition, the life expectancy of obese men is less than that of men with normal weight. The overall health situation of obese men exacerbates the symptoms of low testosterone: a decrease in muscle strength and volume, a decrease in sexual desire and sexual capabilities, the development of gynecomastia, a decrease in metabolism and immunity.

How to suspect low testosterone

The easiest way is to measure the waist - if the man's waist is more than 104 centimeters, then there is a high probability that the man's testosterone level in the blood is below normal (12-30 nm / liter). For accurate data, you must pass a blood test to determine the level of testosterone .

Testosterone Boost Products
The fight against estradiol and testosterone in the male body
Hormonal background in men
Overweight in men. How to lose weight?
Drugs that increase testosterone levels

Effect of testosterone on the body and sexual characteristics